This might be a controversial post, but before anyone starts freaking out, hear me out (and read the updated disclaimer at the bottom!).

We’ve all heard how important it is for us runners to ‘listen to our body’. Intuitively, it makes sense. In this sport, we are constantly pushing ourselves to go farther and faster, and testing the boundaries of our physical and mental abilities. In order to avoid injury and keep ourselves from burning out, it seems logical that we should pay attention to all of the feedback and warning signs that our body gives us.

I believe that for the most part. But my recent accident has given me an alternative perspective and prompted me to rethink this traditional advice. Lying in the hospital, broken, weak and drugged, the doctors told me I would not be able to return to sports for six months. They advised me to give my body time to heal. To allow myself to recover. And to listen to my body.

Listening to my body was the last thing I wanted to do. During the day, I could be distracted by visitors, by the nurses coming in to check my IV or draw blood, or by the constant cacophony of disturbing hospital noises (beeps, squeaks and moans). But at night when the chaos died down, all I had to listen to was my body. The wheezing of my breath. The painful coughs that tried to escape through my broken ribs. The blood and fluid oozing out of my chest tube and down into a container on the floor. The cold sweat that seeped from every pore and soaked through the sheets. These bodily functions all screamed in my ears and told me that I was broken. With every micro-movement, my body told me to give up.

This was not something I was willing to hear. I decided there in my hospital bed that I was going to fight my body as hard as I could. I wasn’t going to ignore it – I was going to yell back. Every time it screamed at me to stop, I would push harder and scream GO.

Obviously, this made me just about the worst patient ever. I made my parents worried, the doctors angry, and the nurses cry. I was constantly asking to do more (can I walk to the bathroom? Can I sit up? Can I at least sit in a wheelchair and look out the window?). The answer was always no, but I kept asking anyway, just in case they somehow forgot that I wanted to do more. I didn’t want to upset anyone, and I knew that they were only thinking about my health… but I had no interest in listening to this broken, fragile body. It was alien to me and everything it was saying was deeply offensive.

At the same time, I was scared. I was constantly being told what a vulnerable state I was in – one wrong move and I’d be right back where I started, only worse.  My instincts told me to fight, but my instincts had not saved me from getting injured in the first place, so I wasn’t sure what to trust.

I found what I needed back in Switzerland. I visited a hospital and sports medicine clinic that I knew, where the reputation was top notch. The Swiss docs and physios
told me that once my liver stabilized after about four weeks, I could start to try to run again. It would hurt like hell, but if I could tolerate the pain, the movement might actually help the ribs heal. That was all I needed to hear – it gave me the hope that I’d been craving.

I took an elastic bandage and taped up my ribs, wrapping around the healing wound and stitches from my chest tube and over the area under my right breast that was still largely numb. Stop, stop, stop. At first, I couldn’t lift my arm to be able to put on my sports bra, so I didn’t bother. Stop, stop, stop. The first few steps outside were terrifying.   Things shifted and pulled in strange ways, and as my breathing rapidly increased, I felt a stabbing pain in my side. Stop, stop, stop. My calves started to twitch and my hamstrings called out in protest on the slightest descent. The cold winter air started the coughing again, forcing me protectively to grab my right side. STOP, STOP, STOP!

I didn’t stop. For my first run outside after the accident, I ran 10km through the valley in Chamonix. And I survived. The next day, I ran 12km. And I continued running every day after that. My body continued screaming at me – STOP, STOP, STOP! – and I continued on. And you know what? The doctors were right. I got stronger. The pain lessened. And my body shut up.

Over the last month, I’ve consistently run 100km/week and this past week I reached 130km. It felt GREAT. Was that smart in the long run? I have no idea. Maybe, maybe not and only time will tell. All I know is that I feel better. I feel human. I feel like ME. If I had listened to my body, I think I would still be in bed at this point. I know that I wouldn’t be running, and therefore that I would be lost.

So, again, I wish to be clear: I’m not advocating for people to be stupid and run themselves into the ground in some kind of dangerous and unhealthy way. Chronic running injuries need to be carefully managed and my injuries were definitely in a different category. Ultimately, I still followed my doctor’s advice – I just didn’t blindly accept the first piece of advice that I got. I questioned, I pushed, and I fought. And once I got the green light, I gave it everything I had. 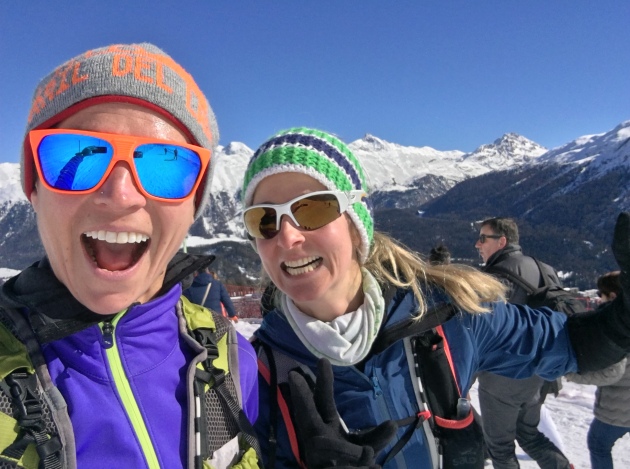 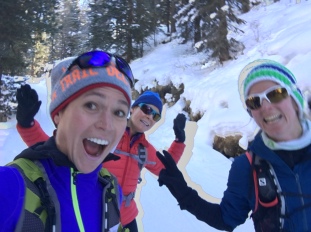 I’m still building up my strength and I’ve definitely got a lot of work to do yet. Recovering from the accident emotionally is a heck of a lot harder than the physical recovery. Climbing up the Jura the other day with my friend Greg, we got to a particularly steep section and I just froze (and burst into tears). I wouldn’t have batted an eye at that kind of incline before, but I was gripped with fear of falling uncontrollably down the hillside.

I’m excited to see where my training and recovery can take me. I’m about 6.5 weeks away from the Madeira Island Ultra Trail, which should be a good way to test where I’m at! And I’m excited to announce that I’ve been accepted into the Salomon Ultrarunning Academy in Europe in May, which will involve five days of epic running with some top athletes, ending in the 110km Salomon Goretex Maxi race (7000m of vert!!)! (I was late to the game, so my name isn’t on the list yet for the academy yet, but I will be there!)

Thanks to everyone for your support and encouragement. I feel incredibly lucky to be where I’m at. Oh, and for those of you who are curious to know, I’ve forgiven my body -actually, I think it is  pretty amazing. We are back on speaking terms and working on building up more trust in our relationship.

***UPDATE: I was right – this DID generate some controversy on some online ultrarunning fora, which is never a bad thing! But I do want to be clear that I’m NOT advocating for people to ignore injuries and irresponsibly harm themselves further. Of course not. I wish to stress that I did follow my doctor’s advice carefully. Everyone has to figure out what works for them, and recovering from an ankle sprain will be different than recovering from a punctured lung and broken ribs. Indeed some injuries can be run through and some absolutely cannot – please don’t read this as an advocacy piece to try to grin and bear it and rush back into a heavy training schedule when you’re injured. I think a lot of the people who reacted negatively to this post recalled their own running injury stories and how they ignored medical advice or ignored their own recovery process. Which will usually always backfire. (See a doctor, and be smart, please!) All I’m saying is that for me, this is what worked, in this particular situation. Fighting gave me hope, life and energy back, and I did it in a safe way, under the guidance of professionals. For me, the emotional recovery is just as important as the physical recovery. And getting back to running as soon as I could helped me get over the trauma of the accident, which was more important to me than anything else. That’s all 🙂 In a sense, I actually was listening to my body, but this time it was my heart. I’ve changed the title and added these caveats in thanks to feedback from the Ultrarunning Community. Happy trails!

11 comments on “Listen to your body? Why I didn’t this time”