I’ve made it to Madrid! IT is 3am and my alarm is set for 6:30…I want to make it to the airport in plenty of time to check into my flight! Online check in isn’t possible, but it appears my flight is still scheduled (!!!!) so let’s hope! Heathrow opened but as the BBC says, “Travel chaos persists”!! I think I’m incredibly lucky to have this flight.  Spain is definitely where it’s at!

The map of volcanic ash…key is avoiding the red!
I just can’t believe my luck. I mean, some might few this whole trip as BAD luck, but let’s think… I just HAPPENED to pack on Sunday night/ Monday morning JUST IN CASE I needed to leave early (which I did suddenly). Then, instead of booking the flight through Bangkok that I was looking at, I just HAPPENED to book one through Singapore… Now that Bangkok is undergoing political protests and a state of emergency has been declared, I’m so glad I didn’t arrange to fly there!!!  And then while waiting in line for train tickets, I just HAPPENED to meet other stranded travellers who wanted to get from PAris to MAdrid. And they just happened to be as determined as I was to get there.
Everything is working out so far. Part THREE of the grand adventure to follow tomorrow! To Doha, layover for 6 hours, and then to Singapore, arriving Thursday afternoon. Another 21 hours of travel ahead…. 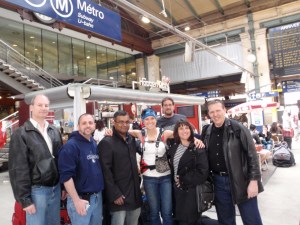 1 comment on “Race to Australia: Part TWO, Paris to Madrid”