I can think of a few defining moments in my life: landing in Africa for the first time,

finishing my first 100 miler, standing up to a sexist boss, witnessing my first attack in Afghanistan and seeing the curvature of the earth from the top of Kilimanjaro. Building up the courage to break someone’s heart and learning how to piece my own back together (mainly through gın and tonics).  Realizing I wasn’t invincible ın Rwanda and discovering that I didn’t give a shit in Syria.  Quitting my job in corporate law from the middle of the Namibian desert. These moments stick out in my mind as fundamentally changing my attitude, my perspective, and my belief system ın how this world works (and my place in it).

My sense is that when we experience these moments, we usually have no idea that they are ‘defining’ us in any way – we are usually too focused on the moment itself to realize its broader significance or long-term importance. But when we are around to witness others’ defining moments, I think the gravity is much more apparent. Earlier this month ın the Gobi Desert, I had the privilege of witnessing what I would call ‘defining moments’ in the lives of Nelofar and Zainab, the members of Afghanistan’s first ultramarathon team.

Nelofar (19) applıed for the opportunity to race 250 km across the Gobı Desert ın December 2014. Not only had she never run a single kilometer ın her life before, but she had also never travelled by plane outsıde of Afghanistan. Zaınab (25) had more experience travelling, but was just as inexperienced when it came to running. Neither woman saw this as a problem – when they were selected for the team, they told me they would aim to win. Yes, it was naive, but their fearlessness was inspiring. Over the next six months, I witnessed Nelofar and Zainab train day after day, week after week, first remotely over skype and then in person when I visited Afghanistan. They faced street harassment, insecurity and widespread doubt about their ability to persevere. One day while training in the mountains, Nelofar found an unexploded remnant of war. In April, they witnessed a deadly Taliban attack in their hometown in which many were killed and dozens injured. They continued to train, sometimes forced to run laps around the compound in which they worked.

We at Free to Run tried to prepare Nelofar and Zainab for what they would face in the Gobi. 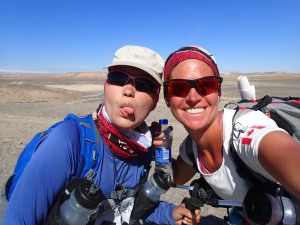 We set up a team of international mentors, all extremely experienced in ultras, who skyped with them every week. We showed them videos, pictures of blistered feet, and told tales of tragedy and triumph. However, I knew deep down that nothing could really prepare them for what they were about to face in the Gobi. Let’s face it: no matter where you are from, whether Afghanistan or the United States, your first ultra comes as a rude shock to the senses.  I knew they had it in them to complete the race, but I also knew that it was going to be an epic battle, both physically and mentally. They were going to hit rock bottom and it would be up to them to crawl out of it.

And they did. They both hit that point when the body and the mind told them to s-t-o-p. When all of those doubts, all of those ugly fears about failure, bubbled to the surface. That moment when they convinced themselves that everyone who told them they would fail were right. And then they broke free. 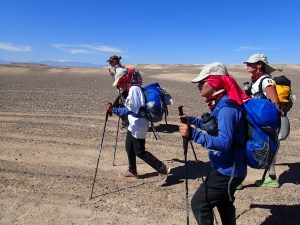 I’m not sure I have witnessed such strength – in anyone – as I did in those women. When I saw Nelofar get angry for the first time and turn that energy into forward motion, my pulse quickened to match hers.  I fell in behind her silently as she marched along and smiled uncontrollably. Then when Zainab put on her shoes again after an hour of battling internal demons in the middle of the night, her courage sprinkled my skin with goosebumps. In these moments, I am not sure I have been more proud…

At the same time, upon honest reflection, I think I also felt a bit of shame. I wrote on the Free to Run blog all the things that I knew I should: I always knew they could do it! I never gave up on them! But if I am really going to open up here, there were definitely moments out there in the desert when I too let the doubt creep in. I let myself wonder whether I had pushed them too hard or expected too much… maybe I was wrong to think they could finish… Perhaps that is why Nelofar’s and Zainab’s performance in the Gobi has affected me so profoundly: they defied everyone’s expectations, including my very own. I have no doubt that they will be forever changed from this experience, and I suspect that I will be too. Was it a defining moment for me as well? Time will tell. However, I learned that as much as I think of myself as a “blue sky thinker”, I am as just much at risk of getting into the clouds as anyone else. More importantly, I discovered that there is capacity for more: bigger ideas, bolder plans, and brighter goals (I can hear a collective *facepalm* amongst some of my readers at this very moment). But hey, why not? Today is my birthday and I’m turning the ripe old age of 33.

Last year on this day I was

kicking up dust at a Medecins Sans Frontiers party in the bush in South Sudan, twirling around under coloured lights made from plastic buckets and full-body laughing with aid workers. Today I am in Gaza, adding to the list of ‘strange places in which I have gotten a year older’ (Syria, India, Kyrgyzstan, South Sudan). I am having difficulty reflecting clearly on the last year, partly because of my surroundings and partly because of the enormity of everything that has happened… but I am looking forward to clearing my head in the mountain air during the Lavaredo Ultra Trail next week!