In starting my NGO, Free to Run, I have spent a lot of time thinking about the role that sports have played in my own life and what running has taught me about myself, about life, and about human nature. Here are my thoughts: 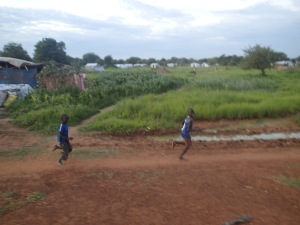 …today, I’m celebrating my 32nd birthday from my tent in Mingkaman, South Sudan. When I think back to a year ago, I never would have anticipated I’d be where I am now… but I’m so incredibly grateful and happier than I have been in a very long time. Life. Is. Good. 2014 has already been one of the best years of my life so far and all signs are suggesting the year of being 32 is going to seriously rock.

I started my day with a run through the market under clouded skies and even discovered a little trail through the bush. Tonight, there is a party at the Medecins Sans Frontieres (hey ho) and tomorrow we have a little ‘drunch’ (way better than brunch) planned in the humanitarian hub. A bottle of wine even appeared out of the sky by helicopter for me yesterday, which was magical (thank you Andrew!). I’ve been loving seeing all of the messages and photos from friends and family around the world in different time zones. I feel loved, lucky and blessed!  Now, back to the compound to put on my best t-shirt and maybe even a little deodorant for those MSF docs….

43 comments on “What Running Has Taught Me”