The horse whose hooves have trained on rock can walk anywhere.
-Ghanaian proverb I learned on my first trip to Africa in 2002

If there’s one thing that living in a tent in South Sudan will give you, it’s perspective. Oh, and the occasional bout of giardia, but that is a story for another time (or, um, never).

Since arriving in Gaza over two months ago, I have found myself reflecting back on my time in South Sudan rather frequently to help keep my head on straight. I don’t think anyone would describe working in Gaza as ‘easy’, but compared to my previous posting, it is a walk in the park (if I were indeed allowed to walk outside in a park in Gaza, that is). Whenever I start to get overwhelmed, I look at the roof over my head, the taps above the sink, and the vegetables in my fridge and I realize that everything is actually just fine. At least here if I need to have a 10 minute pity party, I can do it in privacy behind closed doors, which simply wasn’t an option in Tent City, South Sudan. (I pretended that my mosquito net over my mattress was my own little ‘cone of silence’, but in reality it was no better than Maxwell Smart’s – you could hear everything).

At the same time, the tough aspects of living in Gaza have helped me gain perspective on some of my past experiences that I wish I had had at the time. The security rules I am living under are probably the strictest out of anywhere I’ve lived, including Afghanistan (which is saying a lot).

To give you a bit of insight, I live in an apartment building, one of only a few that is cleared by the UN. I cannot cross the street to grab a bottle of water, although during certain hours I can be escorted by a guard to another UN-cleared apartment building next door. Sometimes. There is a gym I can use at a UN compound nearby, but I can only travel there by armoured vehicle. The human rights office is too small to have drivers on call in the evenings and weekends, so I need to rely on other UN colleagues for rides. Strangely, I haven’t found anyone who wants to do a 3-5 hour workout, so I am often limited to 45 minute treadmill runs, which I have learned to savour.

The compound is small and cramped, unlike the ‘luxurious’ compound I had access to in Afghanistan. If I get tired of the treadmill, I can run around two small parking lots, the mechanic shop, and up the stairs of one of the office buildings to the roof, where I can jump over satellite dishes and metal pipes to try to extend my workout. When I can’t find a ride to the gym, I resort to running up and down the stairs in my apartment building, often with my headtorch on because of a lack of electricity.

I wonder when I’ll be told to stop. I’m fairly certain I’ve scared a couple of kids into thinking there was some kind of Navy seal invasion some nights. When my workout is done, I shower in salty water, which I’m choosing to look at as a tropical experience. (Gaza’s only water treatment plant was shelled during the recent conflict, so salty water is all that comes out of the taps)

So much of how we perceive a situation – good, bad, tough, easy – is based on our relative experiences. If you’ve only ever run

10km, a marathon seems impossible; once you’ve run a 100 miler, a marathon is a morning training session. The best thing about completing a 100 miler is not necessarily the race itself; it is the feeling that you’ve pushed the benchmark of your capabilities to a unthinkable level, which opens up a whole new range of unexplored possibilities. While 10 km runs might seem like training for a 100 miler, it is actually the 100 mile run that serves as training for every subsequent 10 km run you will ever do.

In that sense, South Sudan was my Ultra-Trail du Mont Blanc (an epic, vomit-inducing challenge) and Afghanistan perhaps my Vermont 100 miler (groundbreaking and scary, but inspirational). Over the long-term, I suspect Gaza will fall somewhere along the scale of my Hong Kong 100 km race (tough, fun, would do it again). But only time will tell. I’m settling in for the long-haul (for once) and looking forward to staying in one place until the end of next year… with lots of adventures in between (inshallah). The one benefit of living in Gaza as opposed to other hardship duty stations is that I have the ability to get out on weekends if I wish (and if the Israelis don’t unexpectedly close Erez crossing). Over the past 10 weeks, I have gone out to London, Hong Kong, Geneva, and a few weekends within Israel itself, so really, I can’t complain. 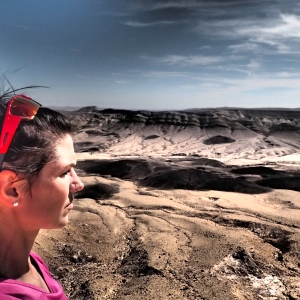 I am building an ambitious race schedule for 2015 to make up for my virtual absence from the race scene this year…. and to enjoy and celebrate the freedom to run, wherever I can find it, in support of my charity Free to Run!  We have launched projects in two countries now, Afghanistan and South Sudan, which is more than I could have imagined within our first year. And that is all thanks to the support of RacingThePlanet, who provided our initial funding, and those of you out there who have generously chosen to donate!  (Thank you!) Every donation we receive makes a massive difference as all funds go directly into our projects. We have BIG things in store for next year, so stay tuned (and check us out on facebook!).

12 comments on “The Gift of Perspective”