A few years ago when I was living in New York, I was given a book by a colleague and friend written by a Japanese writer, Haruki Murakami, called “What I Talk About When I Talk About Running”.  I liked it. But now that I’m laden with a few more years of pain, joy and scars, I am turning back to it. Now I understand the depths of his words that quietly flowed over me before.  I used to see this as a book about running, but now I understand that it is about so much more.

Probably the most famous quote from Murakami’s book is about why he runs.

“I’m often asked what I think about as I run. Usually the people who ask this have never run long distances themselves. I always ponder the question. What exactly do I think about when I’m running? I don’t have a clue… I just run. I run in a void. Or maybe I should put it the other way: I run in order to acquire a void. People’s minds can’t be a complete blank. Human being’s emotions are not strong or consistent enough to sustain a vacuum. What I mean is, the kinds of thoughts and ideas that invade my emotions as I run remain subordinate to that void. Lacking content, they are just random thoughts that gather around that central void.”

At the time I first read it, I didn’t identify with it. I thought running was filling a void in my life, not seeking one… Running these crazy long distances allowed me to tap into a connection to pain, to overwhelming triumph, to failure, to other people, to nature, to an inner strength I didn’t know existed.

But now it makes sense. Now I get it. I don’t run to fill a void. I run to seek a void from the constant searching for ‘more’. Because the ‘more’ is achieved in those moments of pain, triumph, and failure. Because running in forward motion allows me to stand still and be present.

When I was a kid, I played it safe. I was constantly scared of “messing up” or making the wrong decisions…. I was scared of any kind of change. I was a geek, I was teased, I was constantly worried about what others thought. I studied, I swam, I danced, I played piano. I gave up a school trip to Japan because I didn’t want it to impact my math grades. I dreamed of something ‘more’, but I was too scared to try. 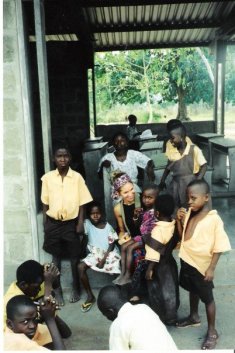 Only as a young adult did I start to open myself up to ‘more’. I took more risks and allowed myself to try, and to fail. I traded in my job waitressing at a nightclub for a volunteer stint in Ghana. I wanted to throw myself into that uncomfortable space and see how it changed me. I went on exchange and fell in love for the first time. He could have been the right one, but I broke his heart. I was searching for ‘more’, and thought that meant I needed to be alone. Years later when I realized what I had done, he broke mine.

I went to India during Holi festival and was left with technicolour skin for weeks. I lost my breath at the honesty with which kids held me in their gaze. I got sick. I had operations. I taught Buddhist monks in Thailand and immersed myself in another religion. I rode elephants and took rafts down 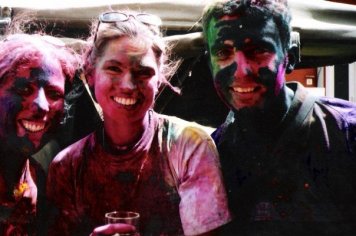 rivers. I studied, I struggled, and I made it into law school. I went into the jungle in Ecuador and cut myself off from communication from everyone for a month and a half. I learned a new language. I learned to like myself better. I allowed myself to gain weight. I played bongo drums with weird Peruvian artists and drank pisco sours until the sun rose. I climbed Machu Picchu and hitchhiked on a train under the moonlight back to town. I bribed my way across borders, slept in weird places, bonded with strangers and sandboarded down dunes in the desert.  I revelled in the search. 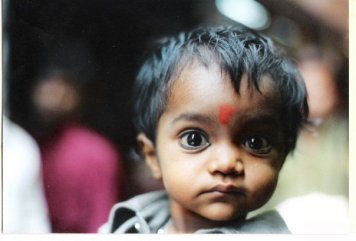 In law school, I befriended men who adored me and dated men whom I only really liked. I went to Ethiopia, Rwanda, Liberia and the West Bank.  I danced around goats at weddings, broke my jaw trying to pretend I could mountain bike, road dangerously on motorbikes, and saw the curvature of the earth awaken before me from the top of Kilimanjaro. I still wanted ‘more’.

I took a job in New York that paid me six figures because it was the smart thing to do… Maybe the search was to end in ‘normal’? But then I left for an unpaid job in London that brought me to Syria, Kenya, and Sierra Leone. I went back to school. I dated the wrong guy and let myself think I was no longer worth love. 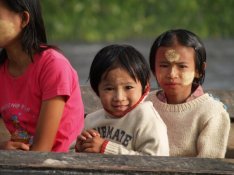 I moved to Afghanistan and felt a deep sense of purpose, even in the mundane.  I felt confused and overwhelmed, but being surrounded by death, in a strange way I felt alive. I felt the air of bomb blasts on my chest, breathed dust into my lungs, got drunk on illegal champagne, and volunteered at a girls’ school. I was brought to my knees at the ability of these kids to dream with hope for themselves and their country in the midst of chaos. I danced until 4 am in Dubai, ran in circles until midnight in an armed compound in Kabul, prayed silently to our Nepalese guards for safety, and escaped to a jungle retreat in Sri Lanka, surrounded by candles and birds instead of gunfire and planes.  The search for ‘more’ never subsided. 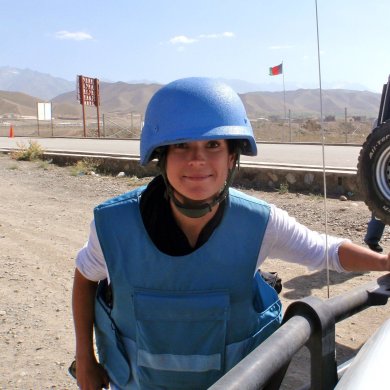 I fell in love with someone I thought was my ‘forever’ and was transported and transformed. I found a deep belief in someone else that transcended all logic, and ignored all common sense. I believed I was accepted. I believed we would have endless adventures together. I believed I was no longer alone. I believed I could stop searching for ‘more’. I believed I had found ‘it’. I was wrong. I. Got. Hurt.

I’m starting to wonder, is there an endpoint to the endless search for more? Or is the search itself a constant state that we should actually strive to keep? I’m not sure at this point. But I do know that as exciting and fulfilling as the search can be, it is exhausting. 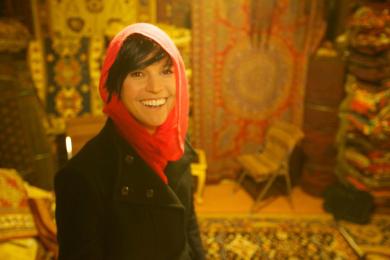 So that is why I run. Because when my legs are in motion, I’m there. I’m in the present – I’m at ‘more’, if only for a brief minute. This is the comfort of the void. In the pain, the suffering, the triumph, the struggle, my constant drive for ‘more’ is silenced. By moving forward in space, I allow myself to stand still in time.  Ultrarunning allows this to happen in the most extreme form… and that is why I do it. That is why I need it. I that is why I hope I will never stop. 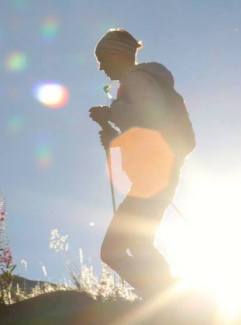 I don’t think I’m the only one who feels this, which is perhaps why I am deeply drawn to others that have the same thirst for ‘more’. Drawn to those who actively choose to leave behind comfort in order to learn more about themselves, in whatever form. It doesn’t have to be through running. Perhaps in life the goal is to find a way to sustain the search, rather than to seek some comfortable end point. Perhaps in love the goal – at least for me? – is to find someone willing to search with you. Or someone who doesn’t make you want to stop.  I’m not saying it is healthy to be in a constant state of dissatisfaction, but I do know that for me, the search for more keeps me alive.

One of my favourite descriptions of the search for this Murakami-esque void through running can be found in a comic on The Oatmeal in which the author describes his epiphany during one particularly dark and stormy run:

“It was on this day, during this terrible and wonderful run, that a thought occurred to me, a thought which has never left me: I’ve always considered the question to be ‘Why am I alive? Why am I here? What’s the point of me?” And to that I say: WHO CARES! FORGET THE WHY. You are in a raging forest full of beauty and agony and magical grapey beverages and lightning storms and demon bees. THIS IS BETTER THAN THE WHY.

I run because I seek that clarity. Maybe it’s superficial. Maybe it’s just adrenaline and endorphins and serotonin flooding my brain. But I don’t care. I run very fast because I desperately want to stand very still. I run to seek a void.  The world around me is so very, very loud. It begs me to slow down, to sit down, to lie down. And the buzzing roar of the world is nothing compared to the noise inside my head. I’m an introspective person, and sometimes I think too much, about my job and about my life. I feed an army of pointless, bantering demons.  But when I run, the world grows quiet.  Demons are forgotten….” 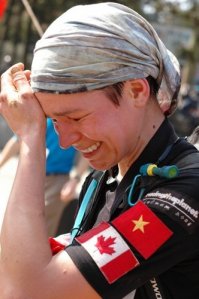 As with any breakup, I’ve been consumed in these past few days with the why and the pointless, bantering demons. But I know the solution is to put on my shoes, and keep running. Keep searching. Keep seeking the void.

I’m humbled and overwhelmed by the response of my friends this past week. People I met once at a conference years ago who reached out, people I haven’t seen for years, and people whom I’ve leaned on heavily before to get me out of a hole.  Reply messages are coming. Thank you. I hope I never have to repay the favour, but I am here.

So. Next steps. My future in Hong Kong is no longer my present, and I’m working on accepting that. I’m headed to France (via a stop in NYC) for immersion classes for November and then Oslo for a course in protection work… After that, who knows? The search continues.  And it is the familiar scary, exciting and exhausting place that I know too well.

One of my other favourite quotes from Murakami’s book is that he hoped on his gravestone it would say that he was a writer (and runner), and that “at least he never walked”.  It fits with another quote that a friend sent to me this week:

“Life’s journey is not to arrive at the grave safely in a well-preserved body, but rather to skid in sideways, totally worn out, shouting “holy shit…what a ride!”

I may be hurting now, but at least I’m not walking. 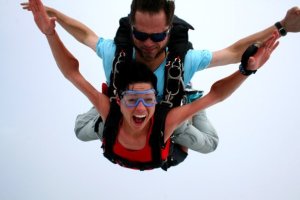 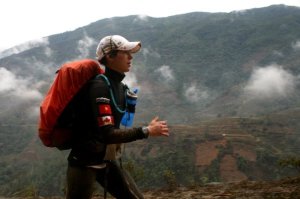 46 comments on ““At Least She Never Walked””