I’ve been out of Afghanistan now for almost four weeks and I’m finally starting to relax.  Coming home has been a relief above all else.  I feel that I have taken the support of my friends and family for granted a bit and it feels amazing to be next to loved ones again.  I’ve been too busy laughing, socializing and running to blog lately, but here is a brief recap of my journey back to real life!  I’ve also reflected on some of the benefits of trail running at the end of the post – thanks for reading!!!

I began my post-Afghan life with some serious debauchery in Hong Kong where I was introduced to the strange and wonderful world of the Rugby Sevens. If you haven’t been before, be warned: it is impossible to be sufficiently warned!  My girlfriends and I (including a couple of RacingThePlanet friends) all went as different Disney characters. Amidst the sexy and seductive Jessica Rabbit, the gorgeous Ariel, the cheeky and adorable Betty Rubble, and the mischievous Minnie Mouse, there was me – the Road Runner (beep beep!!). 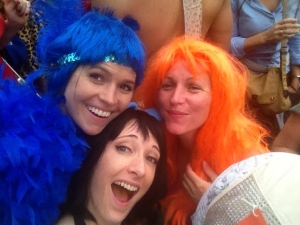 I have seen a lot of things in my life, but I have never seen anything like the South Stands at the Rugby Sevens. In the row in front of us was a group of half-naked 20-something year olds dressed as angels with sayings such as “a little piece of heaven” scrawled across their hair-free chests. By about 10 am, most of them had either urinated or vomited in the stands (gross). Then there were the baywatch boys, top gun crews, black swans (males and females), tarzans and janes, superstars of all varieties and even some people dressed as tesco horse meat, all in various stages of drunkenness. I am pleased to say that I made it until about 3pm before I bailed for an afternoon nap in my bird’s nest back at the Mandarin Oriental. Beep beep!

There was only one way to repair the damage of mystery meat and multiple vodka red bulls: head out on the trails surrounding Hong Kong. HK is any runner’s dream with miles and miles of accessible running trails within minutes of the city. Unfortunately, in line with the Chinese’s obsession with ‘development’, many of the trails have been covered in concrete, which makes it feel more like road running through a jungle at times.  However, the scenery is so amazing that you won’t even notice most of the time. 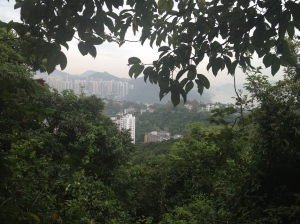 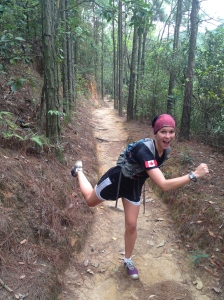 The options for trails are endless and extremely accessible. In my opinion, the trail system in HK is perfectly set up for nature-loving workaholic urbanites. In other major cities such as London and New York, you have to take a car or a train ride before you can escape to some real trails. However, in Hong Kong, a fantastically hilly run is just a short jog or cab ride away. And the best part is that you never really have to pay attention to where you are going, nor do you have to plan out-and-back routes or loop courses. You can just run and run and run to your heart’s content.  Whenever you feel like stopping, all you really need to do is find the next path downhill, which will likely lead you to a road and a cab.    Awesome.

The four longest well-known trails are the MacLehose (100 km), Wilson (78 km), Lantau (75 km)and Hong Kong (50 km) trails. If you want more specific information on HK trails and you don’t know anything about the city, I found these links to be helpful!

Once I got my feet wet on trails again, I wanted more. After five days in Hong Kong, I flew to Vancouver to reunite with my family. I couldn’t wait to re-explore all of the beautiful beaches, trails and hikes that the city had to offer.  Back in business on Canadian SOIL!!!!   I thought I would look out of place running along the water grinning like an idiot, but as it turns out, everyone else was as well – Canadians are happy people, that’s for sure. I think the Canadian geese were even smiling at me. 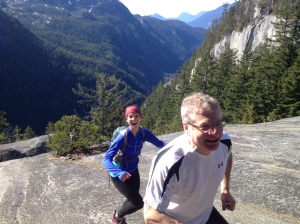 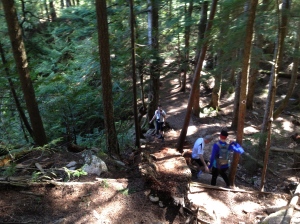 My favourite hike was with all of the ‘boys’ in my family up the Stawamus Chief (the “Chief”) outside of Squamish. It rises 2300 ft above sea level and is considered to be the second largest granite rock in the world. It has three peaks, all of which are accessible and offer seriously wicked views of Howe Sound. Of course, in order to convince my Dad to join us, I may have downplayed the steepness of the hike or the fact that we would have to use ladders and ropes in order to summit the second and third peaks, but anyway 🙂  (The photo above shows him sneakily racing ahead of me to the top – unfair head start!!)

Every moment I spent outside was a pleasant sensory overload. I was overwhelmed by the fragrant smells of sea, wood and moss; stunned by the silence and and calmness of the water on the shoreline; and energized by the vibrant colours dancing in my field of vision. Gone were the browns and greys of Kabul, and in their place were greens, blues and purples of beautiful British Columbia.

After 10 days on the West Coast, it was time to head off to breathe in some cold, brisk Ontario air.

Step 3: Vancouver to the Ontario cottage

A few years ago my parents bought a cottage on a little lake about 45 north of Kingston, which I’m convinced is a little piece of heaven. I’ll let the photos speak for themselves! 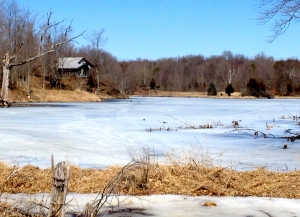 I can’t believe the positive effect that all of this trail running has had on me over the past couple of weeks – physically and mentally.  I think I coped as well as I could have running on roads or treadmills in the compound in Kabul, but now that I’m out I realize how much I have missed!!I think no matter where we are in the world, we can all get stuck into a gym or road running routine sometimes if we aren’t careful.  It is often logistically more difficult to get out to trails than to simply step outside your door and hit the road or to head to the gym around the corner. When I used to live in Manhattan, I was always pressed for time. If I had an hour free in my day, I could still fit in a workout because my gym was right next to work.  In order to get to trails, I would need to arrange a car or hop on a train…  I often didn’t have the time or energy to figure out how to make that happen and so the gym or road always won out.

So what are the benefits of running on trails vs road? Here is a quick and dirty summary (feel free to add some of your own in the comment section!):

Trail running allows you to train on much softer surfaces than when you pound the pavement. Soft spongy soil covered in pine needles, muddy ground, grassy fields, loosely-packed dirt – all of these types of terrain provide much more ‘give’ underfoot than any road or treadmill would.  Unsurprisingly, these surfaces provide much better protection for your joints than road, and this can help to reduce some nasty injuries. In short, better shock absorption means less damaging forces on your joints and bones.

Trail running can also help reduce your chance of injury by forcing you to vary up your routine. When you run on the road, you are repeating the same forward running motion over and over again, so any problem in technique is amplified. On trail, however, you are constantly changing where your feet land, how long your stride is, and what muscles you are using, so there is less of a chance that you are repeating bad habits.

Trail running can help improve your balance.  When we run on a hard surface like a road, we don’t really have to worry about balance as much. This means that we can easily target our major muscles groups – quads, hamstrings, calves – but we run the risk of letting our ‘supporting’ muscles get weak.  I’m talking about all of the smaller stabilizing muscles in our ankles and calves that really only get fired up when we are running on trail. Every time we run on varied terrain and soft surfaces, we engage these ‘helper’ muscles that help us autocorrect our movements and stay upright.

While any form of running requires a strong core, this is particularly true of trail running. A strong core consisting of the abdominal and lower back muscles helps improve stability and balance, which translate into better and faster footwork on the trails.  After 4-5 days back on trail, I actually pulled my stomach muscles because I simply wasn’t used to engaging my core so much on road. I’ve got some work to do to get my six pack abs back (HA, just kidding), but the stronger the abs, the faster the feet, so I’ve got an incentive!

On a road run, it is easy to zone out and go on ‘autopilot’.  In many ways, it is easy and predictable.  Conversely, on a trail run, you need to be quick and alert, both in mind and body. Trails force us to make constant movements diagonally and laterally, hop over tree roots and streams, climb up steep hills, descend muddy tracks and so on. The rugged and varied terrain requires us to constantly make adjustments in stride, effort, and direction, which requires a much higher degree of coordination and responsiveness.  Therefore, running on trails helps keep us on our toes (literally).

It doesn’t take a genius to figure out that the benefits to trail running go beyond the physical. Getting outside and among the trees helps to clear the head, reduce stress and boost mood.  This conclusion is not just intuitive – it has been scientifically proven. According to a study the University of Essex (where I did my LLM), compared with exercising indoors, “exercising in natural environments was associated with greater feelings of revitalization and positive engagement, decreases in tension, confusion, anger, and depression, and increased energy.”

So with all of these benefits of running on trails, why would we ever run on road?!  Well, there is actually a reason to do both. Trails might be TOTALLY awesome on the body and mind, but only on roads can we do our more ‘precise’ types of training, such as intervals, speed work and sprints. So don’t throw out those racing flats just yet!

I’m now in New York catching up with a few people and preparing to head to Liberia on Monday to help deliver a trial advocacy training course on behalf of Lawyers Without Borders. It’ll be my third time in the country and I’m hoping I’ll be able to see a bit of Monrovia on foot (unlike in 2007 when I was confined to hotel security and armoured cars).  Then it is back in Canada near the end of the month in order to prepare for the next adventure….

KYRGYZSTAN!!! Yup, I’m moving to Kyrgyzstan. More about that in my next post when we’ll chat more about this beautiful country filled with towering mountains, nomadic people, yurts and horses. Sounds like a great place to keep up my trail runs.

7 comments on “Rediscovering My Love of Trails”