It is 9:30 pm here and I finished at 8:55pm tonight…Five minutes shy of 15 hours! WHOA! Sadly your messages from stage 4 onwards haven’t been uploaded yet but I’ll be able to read them tomorrow… and I have all day to blog! REST DAY!!

But I’m getting ahead of myself. I’m barely coherent at the moment, but let’s see if I can recount the day…

Nerves were fairly high this morning. I made it through the night sleeping on rock right under the stars and without a single tick bite (I think!). Bonus. Those little suckers would have had a hard time getting any blood out of me anyway, given how dehydrated I am! I made sure to prepare as much as I could for the long day the night before so that I wouldn’t be scrambling in the morning. For my feet, I checked all my blisters and repopped the big ones. The most intricate ‘foot surgery’ had to be done on my right big toe. Normally if a blister forms under the toenail it is possible to pop it by shoving a needle underneath the nail from the front. However, with the tough ones (often the big toe), the blister can form deeper, more towards the nail bed, making it impossible to pop the ‘conventional’ way. When that happens, you have to drill the nail! Aren’t you glad I’m giving you such an informative lesson?? So anyway, I drilled the big toenail, which gave me much relief! After I was done with my feet, I turned my attention to my shoes. Even though my mizuno wave elixirs were only about a week and a half old going into this race, they are absolutely destroyed! After climbing and jumping over the rocks in the maze, I was dismayed to see that the entire heel of the sole of one of my shoes was hanging on by a thread! EEP! There really wasn’t anything I could do about it (why didn’t I pack a staple gun…ha) so I concentrated on sewing my homemade gaiters back on in the spots that were coming off.

Then I prepared my perpetuem (endurance product by Hammer Nutrition). Instead of trying to mix the endurance powders with water while out on the course, I took 8 scoops (1080 calories) and added a little bit of water to make it into a paste and put into two small sipping bottles. That way every time I passed through a checkpoint I could quickly fill up my water bottles with pure water and simply sip the perpetuem every hour as I went along. Parfait! Alongside the perpetuem I also prepared an assortment of solid foods, such as nuts, pepperoni sticks (very high in calories!), and my favourite, chips.

The biggest dilemma was how to prepare for the swimming section. Some people planned on putting their entire knapsack into a dry bag and pulling it along through the water while they swam. Others choose to put everything inside the backpack into the drysack so that they wouldn’t have to take their backpack off to swim. Given that my backpack wouldn’t fit inside my drysack, I opted for option number 2! I puffed up my backpack and made sure to leave lots of air in the drysack, hoping that it would keep me afloat…otherwise, with my backpack strapped onto me I risked sinking!

We started off at 6am under clear blue skies. Damn. After a brief section on rocks, we had to tackle the swim. I think the swim in total was a few hundred metres, but only 90m was so deep you couldn’t touch. Doesn’t seem like a lot, but I was actually quite terrified! What if I sank??? I plunged in and started the front crawl, literally holding my breath to see if I would float. It worked! After the first swimming section, we had to navigate a couple more over the next few kilometres. No chance of keeping the feet dry today! My feet were already starting to scream….And don’t get me started on the bum chaffing! Like a true lady, I kept my hydropel handy (glorified vaseline to all you non-runners) and kept lubing up every few kms. Ouch. 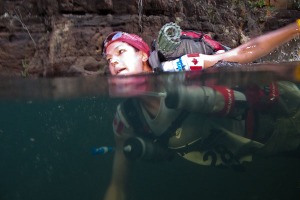 The first 10km to the first checkpoint were really tough coming out of the maze. I ran with Hamish for most of this section, which was really helpful because it was VERY difficult to see the course markers. Many of the tags had fallen down or were torn down by the sheer speed of the frontrunners ahead, and this made navigating through the grass and trees almost impossible at times! It helped having an extra set of eyes. It took almost 3 hours to get to the first checkpoint…what a way to start a 100km day!

From then on, all I can say is that it was hot. Really hot. Not a single cloud in the sky…. The sun kept beating down on me without mercy. I saw my shadow getting smaller and smaller as noon approached. I couldn’t believe how little ground I had covered – and how much I still had left to go! Around 12:00 I caught up with Mehmet (a Canadian dentist and Ray Zahab trainee!) and Ahn (my Vietnam running partner!). I remarked that it should probably start cooling off after 1pm and Mehmet said that he was going to wait until about 1:30 before he put on the jets so that he could stay out of the heat. I kept up a slow run/jog because I just wanted to keep moving forward, but I felt like I was crawling. The sun was just brutal. At every checkpoint I got water poured over my head and bandana, but the relief only seemed to last about 10 minutes before everything was bone dry again. Arg.

Just before I got to the 60km mark, I was running down the track towards a small stream. Omigod – there was a crocodile on the path!! It sped off into the water, but needless to say it freaked me out! Then again just after the 60km checkpoint, I was running alongside a pond and thought I might stop to wet my legs and head… another flash and there was crocodile number two! Luckily, I also got to see a baby kangaroo on the trail to help calm me down, but I was still pretty jumpy!

I was really hoping for a break in the heat after 1pm, but I didn’t feel the temperature drop until about 4:30. The heat just took all of my energy. I drank 2.5L between every checkpoint and started urinating about every 15 minutes. I couldn’t quench my thirst. At all. It was just so tough, but I knew the more I pushed on, the quicker I would get to the end! I thought about my family, my friends, and especially my Uncle Nick, who has been battling a very aggressive cancer. His last scan came back clear and he is beating all odds at the moment. I thought of his strength and perseverence, and the support of the entire Bala family. Compared to cancer, 100km in the heat is a cake walk. I really had nothing to complain about.

After 4:30 the sun started to drop and so did the temperature…and my legs started moving a little faster! I zoomed past the 70k checkpoint and came into the 80km checkpoint with my headtorch on. The rock faces turned red with the setting sun and I really started to enjoy myself. Sure, I was really tired, but I loved the break from the heat! I ran alongside herds of cows and eventually under a brilliant set of stars. After the 80km mark, the course turned onto road. As I rounded the first bend, I was blinded by a giant spotlight… which turned out to be the moon! It was gorgeous. There was a block of clouds that looked like waves in the sky, glowing in the light of the moon. Quite an awesome sight. Finally I reached the 90km mark, guided in by bright green glowsticks. With 10.8 km to go, I knew it was time for a little Beyonce. I took an espresso gel and it must have gone straight to my head because suddenly I was belting out the worst backup vocals to Beyonce possible. Halo, If I were a Boy, and Single Ladies were on the playlist. Absolutely hilarious. Every once in a while an RTP truck would come by and I would have to make sure to shut myself up! It was a major running high for the next 5k. I even did a fist pump in the air during my rendition of halo.

That last 5k was tough, but I was running faster on this section than any other part of the day. It was finally cool and I was ecstatic to be finishing… After a few Rihanna songs belted out into the night, I saw the lights of the finish line. I MADE IT!!!! Of course, the tears came… but only a few (dehydration!). Wow. It was all over.

Patrick, one of the guys who just finished now, said that he worked out that he drank 22L of water during the course. That seems about right! Absolutely ridiculous!!

I’m getting eaten by flies and my feet are starting to swell (oh the cankles…) but I wanted to let you all know that I’m okay and I am so very much looking forward to reading your messages tomorrow!!!

MUCH LOVE to all and thank you for your support. xxxx

Oh yeah, I finished 2nd female and 8th overall today. Wicked Lia finished hand in hand with Salvador!! I am SO impressed!!!!!!! That woman is on fire 🙂 Way to go Lia!

Leave a Reply to The Kemps Cancel reply