How did your New Year’s Eve turn out? Personally, I’ve always chosen the low-key NYE option over making uber-cool NYE plans. For years, I spent NYE with my parents, my sister and my brother-in-law at our farm in Ontario (my brother was usually too uber-cool to join us). The evening would start with happy hour in the kitchen while my Dad put the finishing touches on the dining room table (he loves fine dining, what can I say). Champagne and jumbo shrimp was followed by an elaborate meal with trivia games in between courses. Then perhaps a rousing game of monopoly (one year we branched out and played whovilleopoly instead) and onto the hot tub for scotch and cigars. By the time the ball was dropping we would all be in our pyjamas, happily buzzed, warm, and content in the knowledge that the farthest we would have to travel that night was down the hall and up the stairs.

Last year for NYE, however, I was in New York. You’d think, being in that city, I would be tempted to join the rank and file of the young, beautiful and overpaid in a fabulous night out on the town. Actually, I ended up doing something much better. Instead of spending most of my night sucking in my stomach and teetering around in high heels while I waited in line for an expensive, overhyped club, I put on my spandex and headed to Central Park for a race.

Yup, I’m serious. I ran a race at midnight on NYE.

The race is called the “Emerald Nuts Midnight Run” and it has been running every year in Central Park since 1978. It starts off with a costume contest and parade, and at the stroke of midnight runners set off into the night to an amazing fireworks display and the sounds of a band. Some of the runners are serious (steer clear of them) and others are completely drunk (um, steer clear of them too), but most are just happily buzzed and excited to start of the New Year in a fun, healthy way. There’s even a non-alcoholic champagne toast at mile 2 – last year it was so cold that it was more of a slushy, but hey, it is the thought that counts, right?

Being in London for NYE this year, I was really hoping I could find a similar event to attend… but my search for some British Emerald Nuts turned up fruitless. Come on, England, let’s organize something for next year, eh? 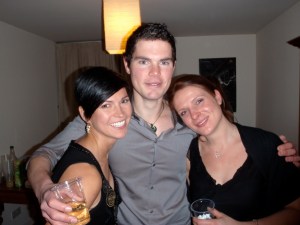 I compensated for my boozy night last night with an amazing run along the canal this morning. Ooops, scratch that, I meant to say this ‘early afternoon’. The canal system through north London is pretty incredible. I can run all the way along the water from my flat in Maida Vale (starting at Little Venice) and follow it along through Regent’s Park, Camden and onwards to Angel….it goes much further than that, but I usually get lost at that point because the path leaves the canal briefly and I’ve never managed to find my way back. In due time.

Last year my New Year’s Resolution was to train smarter and avoid injury. That resolution lasted all of 9 days when I broke my pelvis in a race in New Jersey on the second Saturday in January (yes, I ran until my pelvis actually shattered). Sigh. This year, I am making the same darn resolution. I WILL train smarter this year. I’ve got four months until Racing the Planet: Australia… and I’ve got a long road ahead. I need to work on my flexibility, strength, muscle imbalances, weight…. but I am excited to start properly training again. 2010 here I come.

2 comments on “Looking for Emerald Nuts in London”